This photo captures the moments just before my husband handed Big Sprout the garter snake that had eluded both of them for the better part of fifteen minutes.  It was the third of three snakes that had emerged from the crack in our concrete on the front porch.  A sure sign of spring and evidently a rite of passage too.

My husband had wrangled the first one, spurring courage in our oldest to follow suit.  Big Sprout went after the second snake until he realized that she was quite a bit bigger than the first one and a whole lot more pissed off.  I expertly determined that she was the mom, and the two smaller snakes that had come out of the hibernacula (my vocab word of the week) were her babies. I truly have no idea, but that was my way to feel less uncomfortable about the fact that there were snakes coming out from under the porch!

Snake two came up in a striking motion toward Big Sprout, and as the girls ran screaming down the driveway, my husband stepped in with the long stick and his gloves to grab her by the tail.  She fought the capture much more than the first one did, and as she thrashed around, Big Sprout gingerly put out his hand asking if he could carry her to the marsh.  My husband brought her closer to hand her off, and her sudden movements quickly changed my son’s mind.

As my husband was depositing snake two in the marsh, Big Sprout worked up his courage again to go after the smaller remaining garter.  His enthusiasm flushed the garter out and after two failed attempts to grab it, the snake disappeared into the large bush off to the side of the house.

“Hey, did you catch that last one?”  Hubby asked as he came back around the front of the house.

“He’s here in this bush, dad.  He’s right there!  I see him! I see him!  He’s going your way!”  Big Sprout enthusiastically reported.

Big Sprout flushed and Hubby scooped.  The third snake was captured and the handoff was imminent.

“Can I take this one down to the marsh, dad?”

“Sure buddy.  Come on over here, and I’ll hand you the tail.” 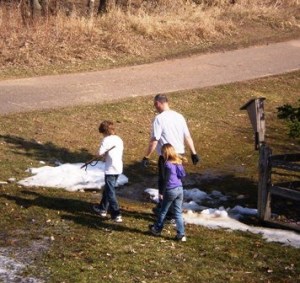 Despite the fact that Big Sprout nearly dropped the snake…twice…he finally had it and he bravely walked it away from the house.  From father to son the snake had been passed, and with it a new confidence that hadn’t been there before those three snake heads poked out from the concrete crack.

3 thoughts on “Please Pass the Snake”