It reminded me of a tale I know…with an old man and the sea
A young boy cast his fishing line to see what he could be.
From the dock he threw a cast, determined to reel one in.
He felt a tug of the smallest sort, and that’s where our story begins.
He felt that pull and he pulled back, and in the bobber came.
He pulled his catch up to his hands…he had won the fishy game.
It was much smaller than he had hoped, but, hey, his hook had set.
Plus then his cousin reminded him, “That fish can be your pet!” 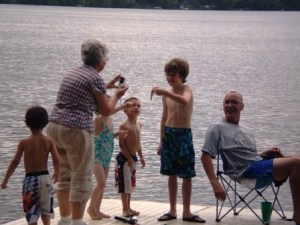