Today’s the day. The end of the world is upon us, and I want my last blog post…ever…to be an attempt to tie things all together.

Doomsdayer: “The end is here.”

ME (whose last preschooler finished school yesterday): “I know, I know. Isn’t it so sad?”

Doomsdayer: “The world is coming to an end.”

ME (still thinking about my own life): “It sure does feel like that. You know, I’m not as ready as I think I should be.”

Doomsdayer: “You need to repent.”

ME: “Repent? Oh, I hadn’t really thought of that.  What should I be sorry about?  Well, I guess I am sorry for a few things that happened along the way. There were plenty of mistakes made as the kids made their way through preschool, but I tried to learn from them.  Like Big Sprout’s “Me-Doll”.  Have you seen that thing?” 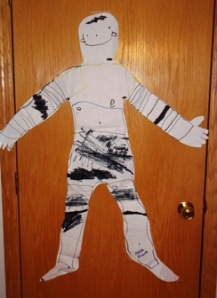 Doomsdayer:  “It is an Apocalypse!”

ME: “Apocalypse?  It’s bad, but that might be a bit extreme? I suppose if we talk about the “Me Doll” as an apocalyptic revealing of truth.  It most certainly was.

Big Sprout was assigned a Me-Doll project when he was four years old.  I have always been the stickler for school assignments and I read it literally:

1) Lay your child on the large piece of butcher paper.

2) Trace around his/her body and then cut it out.

3) Let your child draw him or herself and bring it back to school by Friday.

I started the project on Wednesday, because I knew my active and craft-hating, oldest son was going to complete this project, but begrudgingly.

Wednesday we traced and cut and then Thursday afternoon, I laid his paper version of himself out on a piece of carboard and presented it to him with a bucket of crayons and markers.

He started with the black marker and drew a pair of beady eyes that matched his little dot nose.  He put a great big beaming smile, a tuft of hair and a few toes.

He took out the yellow and drew the start of a shirt, but then he went back to the black marker. He put on his nipples and belly-button, and then…he took out the blue marker.

I smiled, proudly, as he drew more of his shirt and went down to what would have been the outside of his leg. Remembering what was likely the most important self-discovery of that year for him, he then drew on his blue genitalia.

My smile shifted to shock as I watched his little hand work and the blue balls take form.

I was left speechless as my art-exhausted son jumped to his feet and declared,

He ran out of the room completely satisfied with his rendition of himself, and I sat– stunned.

How was I going to carry in a blue-balled, naked me doll to be hung in the halls of the Catholic preschool?

I knew better than to chastise his self-image, because it really was an appropriate view of himself.  The problem was, it was not appropriate wall-art for a preschool.

I showed his dad, when he got home from work.

“What the hell is that?” he asked.

“It’s our son. Or at least his best attempt at an artistic expression of himself,” I tried to convince myself.

“He can’t take THAT to school,” he pointed.

“I know, but he is done drawing for today, and I don’t want this to scar him,” I worried.

“Well, maybe I can get him to draw on some clothes tomorrow before school,” my husband softened.

It worked, Big Sprout saw our logic when we explained to him that even Me-Doll’s need to get dressed for school, so he got out the black marker again.

He scribbled on some clothes, added the stripes of what looked like a referee uniform, and off we went to the preschool unveiling. (internally apocalyptic for me!)

Astride on the arms of his classmate’s parents were the most elaborate me-dolls I had ever seen.  There were princesses and cowboys, superheroes and firefighters. Many of the dolls were three-dimensional and some had fabric and buttons!

I slowed my entrance as the limp referee sadly hung on my arm. I felt like the worst mother ever.

I had volunteered for the day, and as my punishment for being a pathetic mother, I was sentenced to hang all the me-dolls along the wall.

I pounded the staples into the wall. Felt my heart race with every doll hung, and I just knew Big Sprout was going to have to come to terms with my inadequacies.

The origin of the word apocalypse includes the idea of uncovering…revealing.

Today marks the end of preschool for our family. It could be the end of the world too, but in case it’s not, it can still be a day for a triumph of good over evil.

Every phase of life offers such chances for victory…we just have to be willing to seek out the truth of the matter, and accept the presentations offered. The more raw, honest and revealing the offerings, the more important that acceptance is.

I am grateful for my revelations…and I want to be mindful of every one. All the way up to the very end.