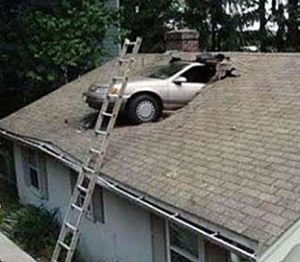 For the record...this is NOT my car!

Eleven years after my spring spent in a wheel chair, I had another broken spring.  That spring broke my car, my weak grip on motherhood, and it almost broke my marriage.  The following are excerpts from my book Choosing to Grow: Through Marriage.

It was icy because a wet snow storm had just blown through and the temperatures dropped quickly just after.  My husband and I were caravanning, and for a while I had both the kids in my car.  We stopped for dinner in Des Moines, and the decision was made to move Nate to his dad’s truck so he could watch a movie.

Seven-month old Haley was going to go to sleep and I had planned to listen to a book on tape.  So, with Pudge in the lead on I-80, I followed behind with my car in cruise control and Haley quickly dozed off in the seat directly behind me.  I could tell the roads were starting to get slick, so I tapped the brakes to disable the cruise and slowed a little.  We started up a slight incline and the back of
Pudge’s truck did a fishtail.  As I accelerated to make the hill, in that same spot, I felt the ice take control of the back wheels of my car and as I started into a 360-degree spin toward the shoulder, I realized there was nothing I could do.

I hit the grass off the right shoulder with my back wheels first, but I was coming in sideways.  Everything caught once I was off the ice, and I saw the ground come up to meet the window.

The windshield shattered and the crunch of the car was instantaneous and
terrifying.  We rolled once and landed at the bottom of a hill, perpendicular to the highway, on the wheels, and with the engine running.  I couldn’t see the
highway where my husband had been, and I didn’t know he had seen my lights
disappear off the shoulder in his rearview mirror. I reached for my cell phone,
and simultaneously heard Haley crying in the back.  I was relieved to hear her before I even had a moment to wonder about her.  I jumped out of the car, phone in hand, oblivious to the freezing temperatures.  I threw open Haley’s door and after merely glancing at the crushed and mangled side where Nate had been sitting, I snatched Haley out of her seat and pulled her tight to me.  I stared in shock at the tv/vcr that had flown from the back of the car and had landed next to Haley’s backward-facing car seat.

I think I was trying to dial my husband when I realized that someone was yelling at me from the road.  A car had pulled over and asked to help.
Dazed by what was happening, I muttered something incoherent and then saw the reverse lights of my husband’s truck.  He was backing up on the shoulder and I didn’t need the help of the person who had stopped.  Everything was happening in exaggerated slow motion during the crash and I let down my guard a little when I saw Pudge.  Before I knew it, he was ushering me, shaking, through the grass to the warmth of his truck.

He put me in the driver’s seat, handed me his cell phone and said, “Tell them where we are and that you just had an accident.”  He then ran back to my car to get out some of our things.

Haley was loaded in next to Nate, who thankfully had no clue what was going on, and I heard a woman talking to me saying, very matter-of-factly, “Ma’am, now where are you?”

Literally, I was between mile-markers on the side of a dark highway and I squinted to see the De Soto sign several hundreds of feet in front of me.  But figuratively, I was at a major turning point in my life…I just didn’t know it yet.

The state patrol officer, who arrived at the scene, directed my husband to leave our things behind and to get off the highway because the road conditions were worsening and it was not safe to be where we were. We were sent to the De
Soto exit where an ambulance was waiting for us.  The paramedics checked me and Haley and cleared us to go on our way.  I was told to take a warm shower to wash off the small shards of glass that were irritating my face and neck, but Haley was miraculously and completely uninjured.  We managed to wake the motel manager, at the one possibility in De Soto, to wait out the night.  We closed the sliding glass door to our room and Pudge worked to settle the kids.  I squeezed myself into the small bathroom so I could follow the paramedics’ advice.

My hands shook as I turned on the water and by the time I stepped into
the steamed shower curtain I was ready to cry about all I had avoided.  I had avoided the loss of our children.  I had avoided a roll in a steeper part of the
shoulder and I had avoided catastrophic injuries.  I stood crying and shaking while the irritated skin softened and what glass was left from the crash washed down the drain.

Once day broke, I sat in our meager room with the kids while my husband went to where our car had been towed.  He cleared our things there and then drove by
the accident site to reclaim all that had been strewn.  He boxed everything up, met with the insurance adjuster, loaded it all into a U-Haul and the four of us were back on the road before lunch.

I was elated nothing had come of it.  I was relieved Haley would have no
recollection and Nate would only really understand what had happened as the
story was repeated and not because he saw anything himself.  After all was said and done, the only thing we lost was a car, but I also lost my weak grip on the life to which I had been clinging.

What sort of difference was I really making?  I was living to the fullest, right?  Was I where and who I really wanted to be?  I became sadder and sadder when the answers to my own questions were no, I don’t think I’m making a difference, and there is so much more I could do to be living fuller.

What happened then…I went on a disastrous vacation…without my family.

Despite the fact I had never needed a vacation more in my life, I hadn’t considered the ramifications of taking my mind, heart, body, and soul, in the state they were in, on a trip like that.  No mind that has been pickled in nursery
rhymes and make-believe stories should ever be subjected to the tantalizing
world of temptation without the proper defense mechanisms in place.  No heart that has been challenged by persistent time away from its soul mate should be given permission to feel old emotions somewhere else.  No body, finally free of the attachment of a baby and without the weight it has held for years, should be free to fit into fun clubbing clothes that don’t belong to it.  And no soul, desperately seeking purpose, on the heels of the accident, should seek purpose all alone.  There were entirely too many factors, of which I was oblivious, leaving me vulnerable.

What happened next changed my story from  a tragedy of chance to a tragedy of choice. Choosing to Grow: Through Marriage was what I had to do to move through it and beyond it.